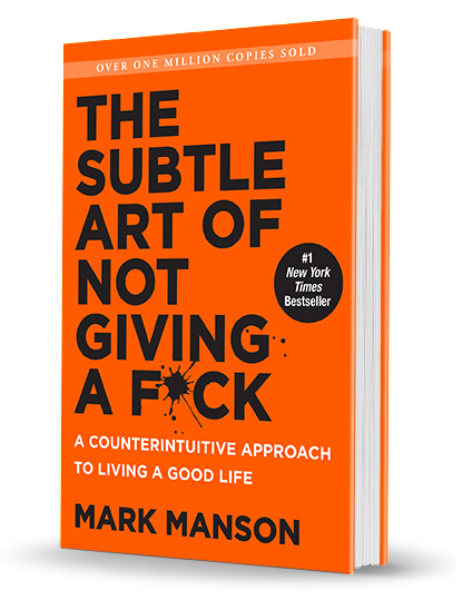 The title alone of Mark Manson’s runaway best-seller The Subtle Art of Not Giving a F*ck: A Counter-intuitive Approach to Living a Good Life draws you in. We wondered at Spirit Times what this book is about given its in-your-face title. First of all, it’s a self-help book which gets its points across through storytelling. In this way, The Subtle Art is gripping, much like Malcom Galdwell’s books.

Manson uses graphic language to pant a stark picture of how nihilistic and self-obsessed society is and his place within it. In the first chapter entitled “Don’t Try,” it may take a while to understand just where Manson is going given his slow, gritty start about writer Charles Bukowski who chronicled the underworld of Hollywood and its environs. Bukowski didn’t care about success but cared enough about writing that he attained success anyway. Here, sprinkled with a lot of F-bombs, blogger-author Manson sets up the point of the book: caring less about what we value today can lead to more happiness tomorrow.

You might think it’s easy to stop caring about something and make new choices, and write off the book. Manson’s true brilliance is sharing his life experiences and insights into how he changed or shed many of the superficial things he cared about and how others did too.

Or, how others believed in something so strongly despite evidence to the contrary, such as the tale of Japanese World War II soldier Hiroo Onodo who hid on a remote island and refused to believe the war was over. Onodo’s  deep-rooted loyalty to Japan to never surrender created great meaning for him, enough to forage in the jungle for years and find meaning in the suffering.

Manson develops his argument with stories of how living a good life is actually less how to care less about things in your life and a whole lot more about changing one’s outlook and perhaps your values and beliefs. He writes on page 72: “Values underlie everything we are and do. If what we value is unhelpful, if what we consider success/failure is poorly chosen, then everything based upon those values—the thoughts, the emotions, the day-to-day feelings—will all be out of whack. Everything we think and feel about a situation ultimately comes back to how valuable we perceive it to be.”

Similar to Galdwell’s Blink, Manson explores the adaptive unconscious: those mental processes that work rapidly and automatically from relatively little information. Manson tells how he changed what was rooted in his unconscious as he grew from adolescence to a now thirty-something. He built strong values within himself and you can too, he suggests.

Manson calls readers to a set of deeper, bedrock values such as trustworthiness and that society takes care of each other. He denounces exceptionalism and self-centric behaviors, seen in many celebrities today.

The adaptive unconscious is the series of mental processes we do every day which affect our judgment and decision making. Manson shares plenty of his own personal struggles. He gets  intimate with the reader, telling what he was thinking when he got caught hiding drugs at school, sharing his twisted beliefs. He also illustrates how society and pop culture, in particular, support an entitlement mentality.

Changing your values and beliefs is hard work.  So is trying to explain how to do it or inspire others to do so. Manson pulls it off through engaging storytelling.

While the subtitle is “A Counter-intuitive Approach to Living a Good Life,” by the end of the book, one may realize the argument or philosophy Manson lays out is actually an intuitive one. His own journey attests by changing your thoughts, you can alter or build your values enough to find a better life.

Manson vividly sums up his journey in the end of the book with a profound experience he had on a cliff at South Africa’s Cape of Good Hope: “Being so still, so conscious, never felt so thrilling. I listen to the wind and watch the ocean and look out upon the ends of the earth—and then I laugh with the light, all that it touches being good.”

Manson’s ability to get to the heart of the matter about the universal truths of raising one’s awareness or consciousness is why this book is worth reading. And gives it added dimension compared to other commercial self-help books. Spirit Times recommends this book for those that want to find deeper meaning and purpose to life, are questioning their own values, or want to change their mindset.

How to stay sane and positive during uncertain times

Stress and negative emotions are the fallout of difficult situations which can ultimately lead to transcendence or raised consciousness. But what can you do now?

September 2108 has robust energy and a lot of planetary…